Arable Reversion and the Scrape creation:

In 2004 it was decided to remove a 10ha field from arable production and create a Scrape.The field was never particularly productive and despite repeated attempts at drainage,water still had a tendency to pool on the soil surface.

The aim was to encourage Lapwings to breed as several hundred can readily be found on the farm during winter months, but during summer, none remained to breed.

A Scrape and a series of foot-drains were created using the RSPB`s Rotary Ditcher, which removed the topsoil and spread it on the field. A pump was installed to ensure a steady supply of water to the Scrape and allow water-levels to be controlled. The field was drilled with a coarse mix of grasses in April 2005. Fencing was completed in October 2005 and sheep introduced in January 2006.

Lapwings have specific requirements in order to breed. Adult birds favour open ground for nesting with little vegetation, which allows good visibility. Closely-grazed pasture and fallow arable land with sparse cover meet these requirements. After emergence, the chicks need a protein-rich diet based on insects and invertebrates. A rich source of food is often to be found close to a retreating water margin, where exposed mud offers rich pickings.

We aim to meet these criteria by controlling stock levels and manipulating the amount of water within the Scrape. 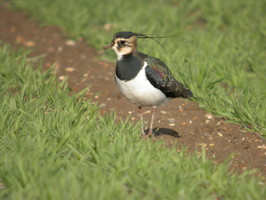 In 2005, low rainfall meant that grass was slow to establish and many parts of the field remained bare.This attracted 3 Dotterels in May, that paused for a few days on their southward migration. An appreciable number of Wheatear were also present in the Spring for a number of weeks before migrating northwards. Larks,Corn Bunting and Yellow Wagtail could all be found on the field in summer of 2005 and it is assumed that they all bred. Three pairs of Lapwing arrived in mid May and were present for at least a couple of weeks, displaying and showing an interest in breeding. Nothing further happened and they departed by mid-June.

In 2009, four pairs of Lapwing and a pair of Avocet bred successfully. An electric fence has been placed around the perimeter of the Scrape to deter foxes as they have had a huge impact on the recent breeding success-rate. We will wait and see what happens...

Welcome to Burnham Wick Farm, a medium-sized arable farm which adjoins the River Crouch in Essex. Please have a look at our website and follow the links to learn more about what we do.